At the same time, my mom’s granddad had developed a close relationship with my dad.  They were great friends, and my dad reminded him of his lost son who had died years earlier.  There were also other reasons my mom explained involving the compatibility of our last names and such, but it went over my head.

In any case, my great granddad saw that my dad was already 39 years old and unmarried, and decided to rectify the situation.  He had four grand daughters, but the youngest one wasn’t of age yet, so he showed pictures of my mom and her two older sisters to my dad and told him to choose one of them.  At first, he probably refused, he was still in love with Nga.  But he eventually had some sense talked into him and gave in.  He picked my mom, she was 21 years old at the time. 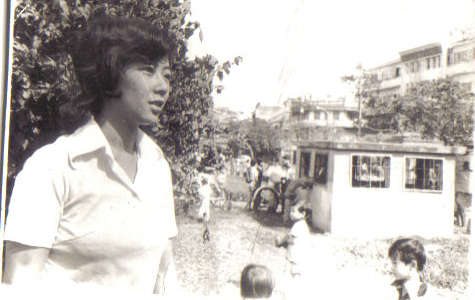 (a younger photo of my mom)

My mom had of course refused, she hardly knew this man and he was so much older than her!  And she had plans of becoming a nurse.  She even ran away for a while, but being the obedient child that she was, she returned home, and begged her grandfather to change his mind.  Her grandfather then took a nail, handed it my mom, and told her to nail it into the mango tree in their garden, and said “Leave older businesses to older people!  If you can take that nail out of the tree, then you can make your own decisions.”  But try as she might, she couldn’t do it.  If I were her, I would’ve chopped the darn tree down.

So my mom agreed to the marriage.  Not soon after she agreed, her granddad passed away.   They had to mourn his death, as all chinese families do, for 100 days.  On November 10, 1975, the 105th day after her granddad’s death,  my mom and dad had their wedding. 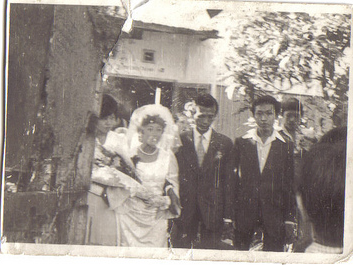 (mom and dad on their wedding day)

Lots of people came.  As I mentioned before, my dad was well liked by everyone and had a lot of friends.  He was a really good person and had a lot of “yi hei” (Cantonese word meaning “personal loyalty”;  Someone who is willing to stand up for or help their friends in need).  His friends probably helped chipped in for the wedding.  In any case, from the photos and what my mom told me, it sounded like a glorious wedding.