There’s even more craziness to how this story ends.  Being the only daughter he had, Nga’s father had given her an ultimatum after the wedding.  She’d be excommunicated from the family if she didn’t leave my dad.  So that particular night when she was visiting them, she made her decision, took a few of her clothes, and left her family.  She loved my dad so much that she left everything behind to be with him and my mom.

And then, around the early 1980s, my mom isn’t quite clear on the exact dates, Nga’s family decided to charter a boat to sneak out of Vietnam.  Lots of people were doing this at that time, because the communist oppression was getting quite out of hand.  Vietnamese refugees would brave the harsh waters of the South China Sea to Malaysia, Hong Kong, the Philippines, or wherever there was a first world country presence that would accept them. 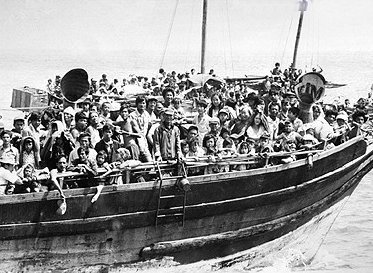 (random image I found of the “boat people”,
this was probably what the conditions were like on that boat)

Nga’s father sent one of her brothers to Cho Lon to find her, and told her that the family was leaving the country, and she should come home to say goodbye to her dad, as they may never see each other again.  Nga agreed, and left with her brother to go back to her village.

The “saying goodbye” part was really a trick, as they wanted her to go with them!  When she refused, they tied her up and threw her on to the boat.  Nga was kidnapped by her own family as they escaped into the ocean that night.

My parents had no idea what happened to Nga. They looked everywhere and asked everyone if they had seen her, but all to no avail.  She just disappeared.  They suspected that she left with her family, without saying goodbye.

A few months later, they received a letter from Nga.  She had written it while on the boat, with our address on it, and a kind fisherman had delivered it back to my mom and dad.  Nga poured her heart out explaining to them what had happened, that her family had forced her against her will to go with them.  She said she loved my mom and dad and us kids very much, and hope to find her way home someday.

Nga eventually made it to France, but there was no way for her to return to Vietnam, or my parents to go visit her.  Back then, everyone was poor and it was really hard to fly between countries just to visit.  They kept in touch through letters for a few years. When we left Vietnam to come to America in 1987, they lost touch with each other.  While in transit to the Philippines, the authorities somehow lost a container carrying important documents and photos, including Nga’s correspondence.  My mom was devastated.

We don’t know where Nga is now.  She is probably still in France, with a family of her own.  She is 5 years older than my mom, which means she is about 60 years old right now.  I wish there were some way we can meet her, I know my mom and dad would still very much like to see her again.

So that was the story of how my dad had two wives, and how we had two moms.  I’m not sure how much of it is true, but it is quite a story.  And from the photos and the conviction in my mom’s voice when she told us the story, I have to believe that at least some of it is true.

If you’re interested and know Cantonese, here is the sound byte of my mom telling me the story.  I’ve heard it before in passing, but didn’t believe her until I saw the photograph of her and my dad and Nga.  So when I visited her last year, I made her retell the story as we go do some shopping.  I’m so glad I recorded it because I would’ve gotten a lot of the details wrong.  Love ya mom :).

Sound byte of the interview with my mom about Nga