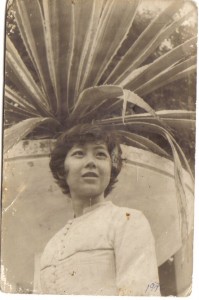 When my dad married my mom, he was 39 and she was 21.   When they were young, my mom’s granddad loved my dad like a son.  One day, he asked my dad to pick one of his oldest three granddaughters to be his wife.  My mom was granddaughter number 3, and he picked her.  She said that when she found out about the arranged marriage, she ran away into the woods nearby and spent the night there crying her heart out.  But in the middle of the night the Buddhist goddess Tara came to her and told her she need to be an obedient child, and for her to return home to fulfill her duty as a granddaughter.  And that is what she did.

My dad is a great friend to his pals, and strives to be a respectable and good man.  But he was not a good husband.  He was an alcoholic, and on nights when his temper flared he would become abusive for something trivial.  I wouldn’t say he was an evil man, this was accepted practice in the backward culture that was Vietnam.  A man is allowed to hit his wife and kids with very little social stigma or consequences.  But those nights make me wonder how she could’ve stayed with him for so long.

One particular occassion, I was playing with my brother when our neighbors came running to tell us, “Your dad is coming home!  And he is drunk!”  This gives you a sense of how bad things were, when even our neighbors knew to warn us when our alcoholic dad was coming home drunk.  I remember the three of us, my twin brother and younger sister, ran into the house and hid all things that were breakable.  Ceramic bowls, drinking glasses, mirrors and such.  We only kept the plastic cups out.  And we did good, because not long after he was throwing things against the walls and cursing at everything in sight.

So my mom dealt with the temper, the alcohol, and raised three kids despite all that.  They owned a business selling irons at a market nearby and life was good for what it was.  The thing is, my mom is the most forgiving person I know.  She cares a lot about everyone, accepted their flaws and misgivings.  With an attitude like that you can overcome anything.  The good news was, when we moved to the States my dad did change.   But occassionally he still came home drunk and let loose a punch here and there.  My mom would stop talking to him for the next week or so but eventually things would return to normal.  The important thing was, he did strive to change.  He knew the errors of his ways, but the culture was so ingrained in him and the alcohol didn’t help.

My mom was borned in 1956, that makes her 54 years old.  She was married to my dad when she was 21 so they’ve been married 33 years.  I believe she came to love him after all these years, as much as anyone can love another person she’s stuck with.  Did she ever considered getting a divorce?  Maybe she did at times, but she never did.  And despite everything I’ve told you, I know my dad loves her very much.  He just wasn’t capable of being a good husband.

My dad had a major stroke about a year ago.  Half of his brain is now gone.  He can’t speak but a few phrases and half of his body is paralyzed.  He is in a wheel chair and has to wear diapers and be fed his food.  Right before the stroke, my mom actually did want to leave him, I’m not sure if it was temporary or if she even had it planned out.  But she bought a one-way ticket, told my sister to take care of the younger sis, and flew to California to take care of my granddad.  She had been away for a month before she got a call that her husband had suffered a massive stroke.  Of course, she flew back to Virginia right away when she heard the news.

Secretly, I suspect the stroke was caused by my mom leaving.  My dad wasn’t in the best of shape, and perhaps the thought of losing her ripped out a vein in his brain.  Nevertheless, she is now with him again.  He is in a child like state, behaving like a little kid. But she puts up with it.  No nursing home she said.  It is her duty as a wife to take care of him.  So she’s now his caretaker, him in his wheelchair and she pushing him around and together they go about their daily lives.  We let her drive his car for a brief period of time, but she isn’t a good driver at all, and after a few months of driving she crashed it into her house and totaled it.  After that we decided that dad was right and we shouldn’t let her drive.  So we help out when we can, driving her and dad around to where they need to go.  On occassions when we can’t drive her, she still pushes him in his wheel chair to the bus station and subway and does what she need to do.  It’s so crazy, but that’s my mom.

After what I’ve told you, wouldn’t you agree my mom is one of the greatest woman in the world?  I do, and love her very much for who she is.  If I were to list all the people that affected my life, she would be at the top of the list. 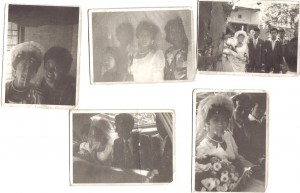 Here is an unofficial, hacked up tour of the Rackspace office in San Antonio, which we lovingly named “Castle” after its predecessor, the Windsor Park Mall. 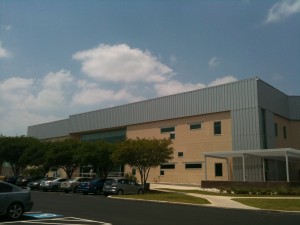 It has been mentioned before, but worth mentioning again: Rackspace is all about substance over flash.  Instead of spending a crapload of money building a new campus from the ground up, our mighty leaders made the decision to buy up an abandoned mall, in a not so nice part of town, and turned it into a kickass office to work in.  We saved tons of money, and at the same time we are helping revitalize the neighborhood. 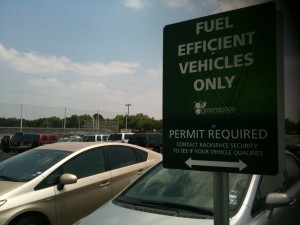 We are encouraged to be green, fuel efficient cars can park in spots closest to the building, and there are also designated areas for people who car pool. 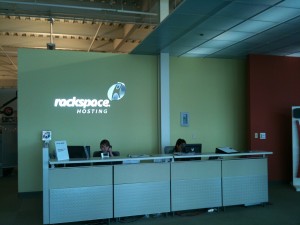 This is the first thing you see through the front door.  No fancy reception area.  No wasted space. 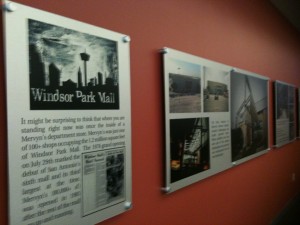 Panels documenting the process of converting the mall into the new headquarters. 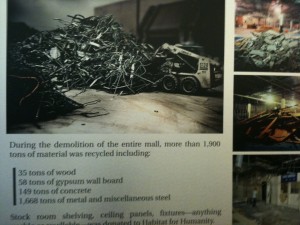 1900 tons of material was recycled during the demolition of the mall. 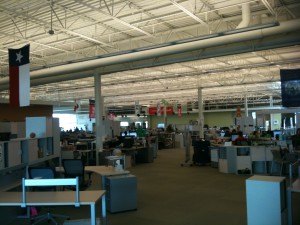 Nothing fancy, just a big wide open space for Rackers to do work in. 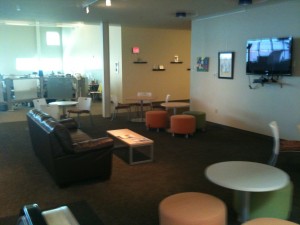 There are break areas scattered around the building for Rackers to meet or just to step away from their desks for a bit. 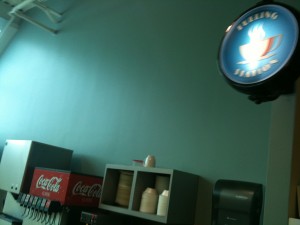 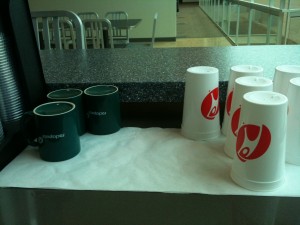 More green initiative.  There are no Styrofoam or other throwaway cups in the building.  We are provided mugs and plastic cups at the fueling stations.  When we’re done we just put them in the sink and they “magically” get cleaned. 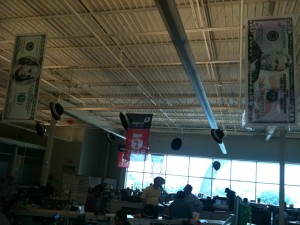 Rackers can hang work-friendly flags above their desks.  I think this is the billing department, by the Benjamins hanging from the ceiling.  5-year and 10-year Rackers also get a special flag to mark their triumph. 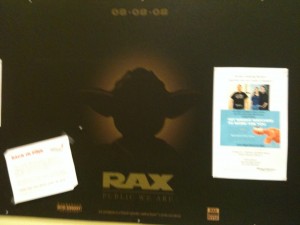 Cool posters around the building.  This one says “RAX.  Public We Are.” 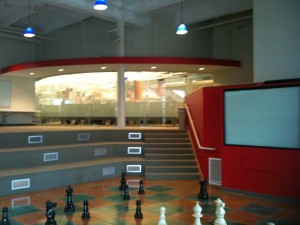 There is a giant chess set in the rally room!  I took the opportunity to set up a photogenic moment, but couldn’t find anyone to play a game with. 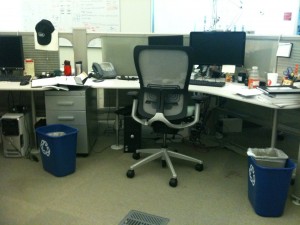 Company-issued recycling bins, every desk has one. 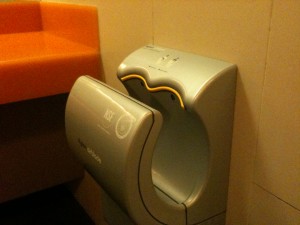 No paper towels in the bathroom, just a super-powered hand dryer!  Yea baby! 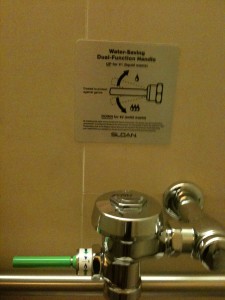 There are even these water-saving toilets in certain bathrooms.  Push up for number 1s, down for number 2s. 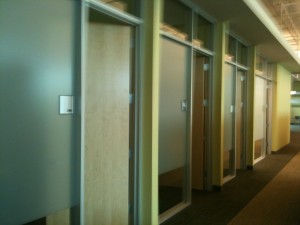 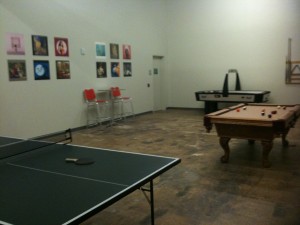 The break room, I think they kept it low key to discourage people from hanging around too much. 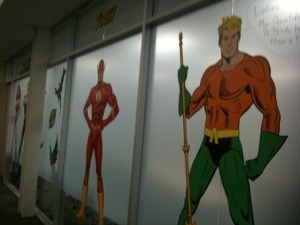 The wall of superheroes. 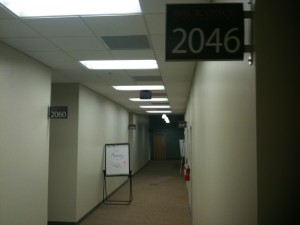 The Rackspace University classrooms where Rackers can signup to take classes in anything from karate to Redhat System Administration.

And there’s still tons of cool stuff I couldn’t show you, but this post is getting quite long so I’m going to stop.  But as you can see, I’m pretty fond of the place.  I work in the Austin office but try to make the one-hour commute to San Antonio whenever I can.  Being in the office just energizes me and reminds me what an amazing company I work for.  Go Rackers!

This is both a testament to the creativity of my fellow Rackspace co-workers, and the amount of free time they have at work.  In either case, these are exercises in love and compassion for each other …in the let-me-pull-your-hair-because-I-like-you kind of way.