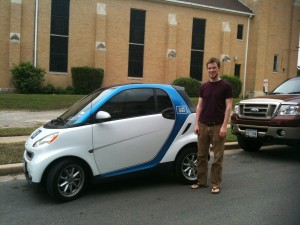 Stu and I took a little time out of this hazy Sunday to test out the new car2go program that recently launched here in Austin.  Created by the German automobile manufacturer, Daimler, this car-sharing service has just recently completed its beta phase and is now available to the public.  Being the hip and trendy nerd-geeks that we are, Stu and I are all about innovation of any kind.  Plus, we were bored and I needed to go spend money frivolously. 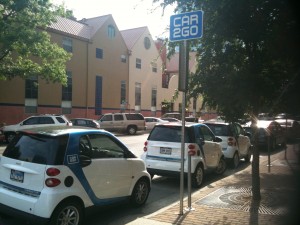 We signed up for membership through their website last Wednesday and had received our membership cards by Saturday.  There are no membership fees and no startup fees, you’ll just get charged at the rate of 35 cents a minute, or $12.99 maximum for the hour.  There is also a day’s maximum of $65.99, meaning if you rent the car for the whole day, that’s all you’ll get charged for.

It is a bit high, I thought, until Stu pointed out that it is cheaper than a cab ride (including tips), if you’re just moving around downtown.  Plus you don’t have to worry about gas or pay for parking. 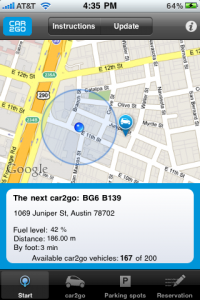 So, you first locate an available car using their website or a smartphone app.  The above iPhone screenshot shows that there is a car 3 minutes from me (on foot) with a 42% fuel level.  There are about 200 cars scattered around the city and I was surprised to see a bunch close to where I live, which is further away from the main downtown area.  Stu found one just a block away from his apartment on 4th and drove to my place on 11th to pick me up. 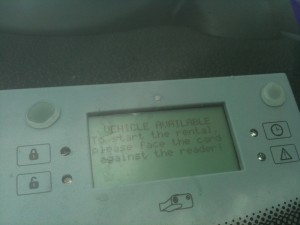 Checking in was relatively simple.  To unlock the car, you’d hold your membership card up to a scanner shown thru the windshield. 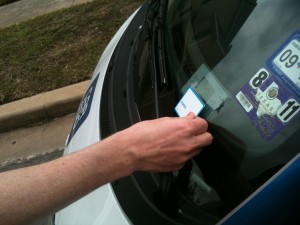 When you’re in the car, you’d enter your secret pin that you picked during the registration process.   Once the pin has been accepted, it’ll instruct you to grab the key from the glove compartment to start the car. 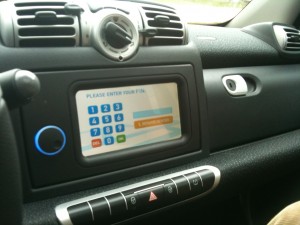 So we took the car and cruised around downtown, and it was pretty speedy and easy to handle.  I was disappointed that these cars aren’t electric or even hybrids, but I hear they’re coming soon.  Even so, these cars get pretty good milage, from 33 to 40 miles per gallon. 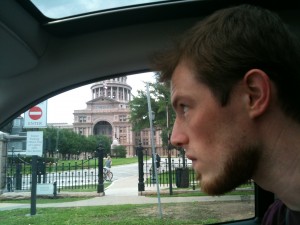 I drove first and we stopped near the State Capitol. 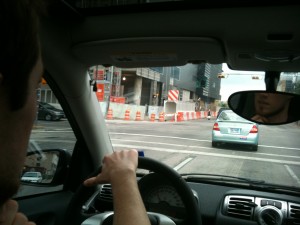 Stu is behind the wheel, we switched off taking turns test-driving the car. 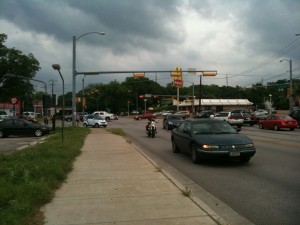 At a stoplight I jumped out and took off running further down the road so I can get shot of the car in traffic. 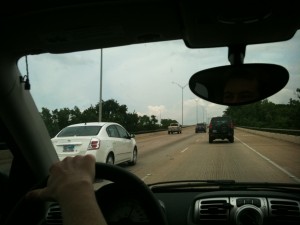 We even took the car on to a highway to test it at a higher speed.  It went up to 75mph without a problem. 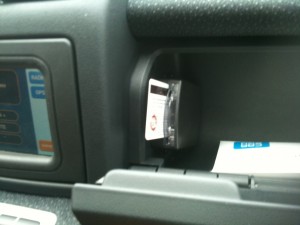 If you are running low on gas, there is a prepaid gas card in the glove compartment.  According to the website, you can pull up to any gas station in the service area, enter the milage and number on the card, and fill up the tank.  They’ll even give you a small credit as a “thank you” for the time you spent refueling the car. 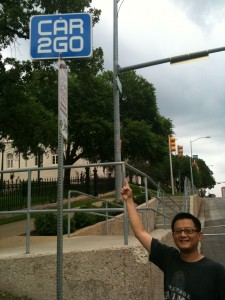 You can park in any of the legal parking spots, including metered spots (for free), and they also have designated car2go parking spots scattered all throughout the city. 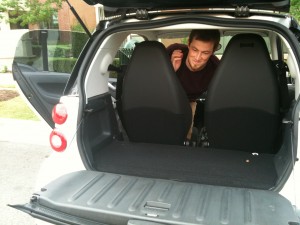 There is a little cargo space in the back, enough for you to put laptop backpacks or small luggages. 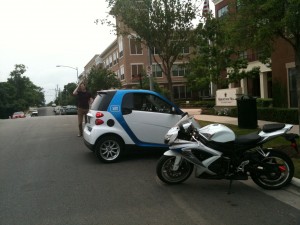 It is illegal to park the car vertically against a curb, but we tested it out anyways.  It looked so cute next to that bike! 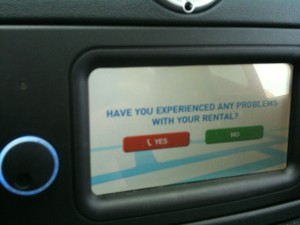 So we rented the car for about an hour, and I spent $12.99 for the sake of research.  Stu is pretty psyched about it, since he doesn’t own a car, and this program will make his life a bit easier.  I am psyched also, for a different reason.  This program has a hint of “futurism” in it that may change our way of thinking about transportation in general.  No, it probably won’t lead to the days where we can zip around in transparent tubes like in Futurama, but at least it is different and kinda cool.  I hope this gets adopted throughout all the major cities in the world.