My Uncle, Who Is Named Sam

I’ve always wanted to hear the story of how my uncle came to America, because without him, the rest of our family wouldn’t be here.  One day I decided to give him an interview about his trip from Vietnam to the U.S.  It is such an amazing story, and I’m glad I had the opportunity to jot it down before it becomes a lost piece of our family’s history. Had an interesting time writing it, hope you enjoy reading it too.

My family worked really hard to save money to buy gold, because the boat owners didn’t take cash.  Once they’ve saved up nine gold rings to pay the boat owners, they sent my uncle out to shore in the darkness of night so he can board the boat to sneak out of Vietnam. 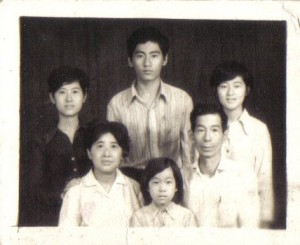 This was in 1979, the war had ended a few years prior and conditions in communist Vietnam were getting worse.  Thousands of Vietnamese were escaping the country to any other places that would take them.  They were dubbed “the boat people” by the international community, and my uncle was one of them.  He was twenty one years old.

The plan was to have small groups of about twenty people per group sneak out secretly in separate boats to a bigger rig waiting further offshore.  From there they would aim for one of the countries that would take them:  Thailand, Malaysia, Indonesia, the Philippines, or Hong Kong.  If they were caught, they would be thrown in jail, fined, and severely punished.

The four small boats had met up where the rig should be, but there was no rig.  They searched and waited until around five in the morning and still nothing.  Either something had happened or they’ve been cheated.

Some of the men became aggressive.  They saw a bigger fishing boat nearby and decided to hijack it.  By this time two of the four boats had disappeared.  The three fisherman on board the fishing boat was forcefully agreed to help, and the people from the leftover boats boarded the bigger fishing rig and they headed for Malaysia. 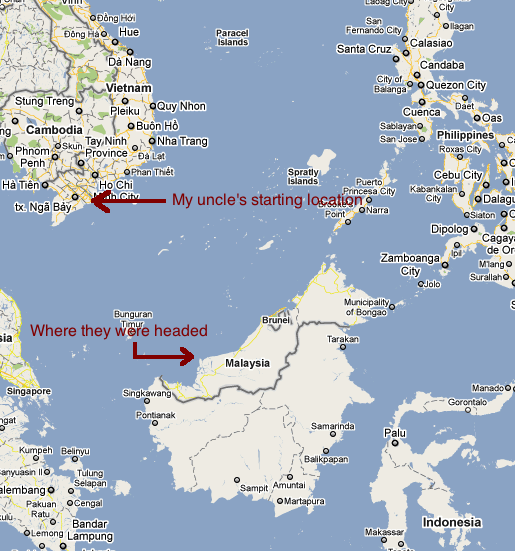 The trip was only meant to last two to three days, and they’ve only loaded enough provision for that amount of time.  By day three, all the food were gone.  They had to find help or they would starve!  Luckily, they spotted another fishing boat and flagged them down for help.

What they thought were another fishing boat turned out to be a group of bandits.   Men with machetes boarded their boat and proceeded to rob them of everything valuable.  Jewelry, watches, nice clothes, they took everything.  The refugees were too scared to fight back.  My uncle lost his watch and a bunch of his clothing.  But luckily, the gold ring that was hidden in his pants stayed safe.

After robbing them of everything worth taking, the bandits left them.  No one was killed but they were very much shaken, and still without food.  They sailed on.  Eventually they spotted another boat.   They were scared that it may yet be another group of bandits, but they were desperate.  Luckily, these people weren’t bandits and actually threw some fish and water into their boat before moving on.

Some time later, they encountered an oil rig.  He said it was a huge ship, several stories high.  My uncle’s riggity fishing boat pulled along side and yelled for help, claiming that they were refugees and that they didn’t have any food or water on board.  The people in the rig threw down provision and water, but they didn’t let them board.  So my uncle’s boat attached itself to the rig and wouldn’t leave.

They were along side for three days until they lost patience and started climbing up the rig.  It was very dangerous, and he said the people on the rig eventually threw down ladders and helped them up.  They were fed western food and taken to a refugee camp in Malaysia.  It had been one week since my uncle began his journey. 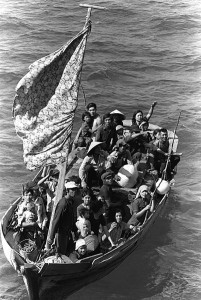 (picture I found in a wiki article about “Boat People”)

He was in the refugee camp in Malaysia for another week before they rounded everyone up to send them to an island where there was a bigger camp.  Nine small boats were tied together, and a big ship lead the pack and towed them out to sea.  On board, my uncle saw that there were lots of food and water and thought it was their supply for the next camp.  But this was not the case, they were lied to.  The camps were getting overcrowded and there were no room for the new refugees.  The ship towed the boats to open water, cut them loose, and sailed away.   The refugees were left floundering at sea.

My uncle said the boats were overcrowded, with barely any elbow room.  There were about two hundred people spread across the boats.  Some of the men took charge and they decided to head for Indonesia, where another refugee camp may take them in.  Four of the boats agreed and followed them, but the next day, they were somehow separated and my uncle’s boat was all alone.  They spent two weeks in the ocean before making it to Indonesia.

Aides from the U.N. and various nations were there to help the refugees.  My uncle stayed in the refugee camp in Indonesia for five months, during which time he registered to the countries that were accepting immigrants.  First, Canada rejected him.  Then he tried Australlia, but also to no avail.  But on the third try, the U.S. accepted him and soon after, he and a smaller group of refugees were flown to the States.

By this time, the plight of the boat people were in the world news.  Reports about drownings and piracy were generating concerns in the global theater.  Luckily for my uncle (and for us), the United Nations High Commissioner for Refugees (UNHCR) had negotiated an agreement with the government of Vietnam.  What came to be known as the “Orderly Departure Program” that lasted from 1980 to 1994, thousands of Vietnamese refugees were able to obtain green cards in a relatively short time.  At that point, he was able to “sponsor” any members of his immediate family over to the U.S., and that was what he did.

My grand parents and the three unmarried aunts went first, in 1985.  My family followed after in 1987, my brother and I were nine years old.  My uncle became a U.S. citizen that year, the rest of the family followed suit over the decades that follow.

So now we are all here, drinking koolaid, watching football, and living the American dream.   We escaped the oppressive land that was Vietnam, and came to the land of opportunity, to pursue whatever hopes and dreams we care to pursue.  And it is all thanks to my uncle, who is also named Sam. 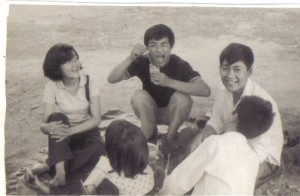 9 responses to “My Uncle, Who Is Named Sam”