We fought our hangovers and got out of bed relatively early the next day (around 9 o’clock).  After a hearty Mexican breakfast at the resort’s buffet, we prepared to go on our jungle excursions by grabbing as many beach towels as we can find.  Berger and Angela hugged them like they were going out of style. 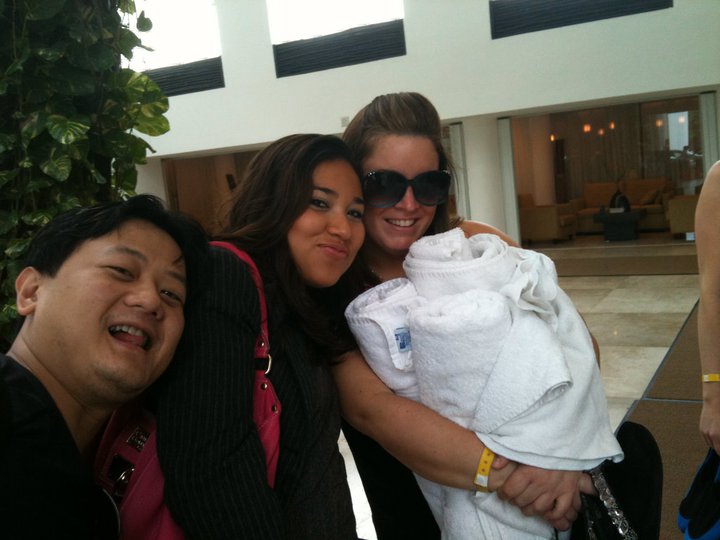 Pat and Leticia had planned the day for us to be at the Selvatica, to do the “Zip-line and ATV” expedition.  The tour package was $129 per person, and included a full day of activities involving zip lines, ATVs, and a cool natural spring.  They even provided a “home cook” meal for everyone at the end of the tour.  The photos and videos were extra though.

The first activity had us putting on hooks and harnesses and hardhats and leather gloves.  We were going to climb up the rickety ladders into the treetops and zip-line our way into the Mexican jungle. 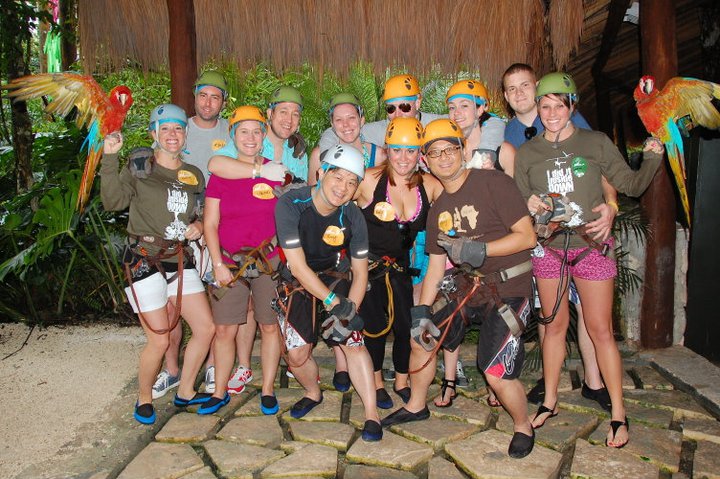 When I heard “zip lining”, I thought it would be a one time ordeal lasting less than a minute, and was shocked to find out that it’d take about an hour to complete the trip.  They had rigged line after line 2 kilometers deep into the jungle and back.  We had to zip across somewhere between 10 to 15 lines (I lost count), our legs tucked in and our leather-gloved hands hanging for dear life, straining with all our might from crashing into the trees ahead.  Fortunately, the well trained staff were there to catch those that couldn’t stop themselves.

The people working at the Selvatica were awesome.  They were fun, humorous, super friendly, and were professionals at their jobs while keeping everyone safe.  For the faint of heart, they even “escorted” you across the lines at your request. 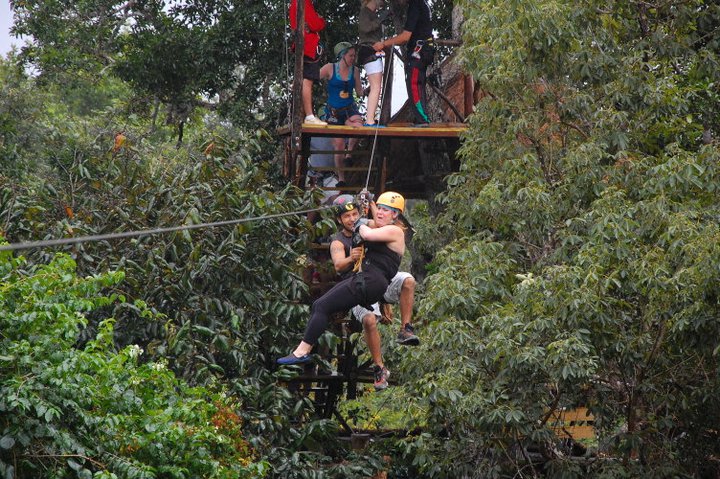 Gliding through the trees with the greenness spreading out in all direction and the ground 30 feet below, it felt pretty surreal.  But being an out of shape computer programmer, I was exhausted after a few zip-lines.  Even though the idea may sound scary at first, it was extremely safe and any fears you have will become unfounded after the first zip across the trees.

We completed the first activity in a little over an hour.  After that, we were loaded on to a “mexican limousine”, as they were called by the always joking guides, which was a rickety looking army truck with no seat-belts and spouted gas fumes like an oil refinery.  We bounced our way through the pothole ridden trail to the ATV station.

After some brief safety instructions, everyone donned their safety gears and picked an ATV for the next leg of our journey.  It had been raining the past few days, and the trails were wet and muddy and full of slush.  We formed a single line and played follow the leader into the wet wilderness. 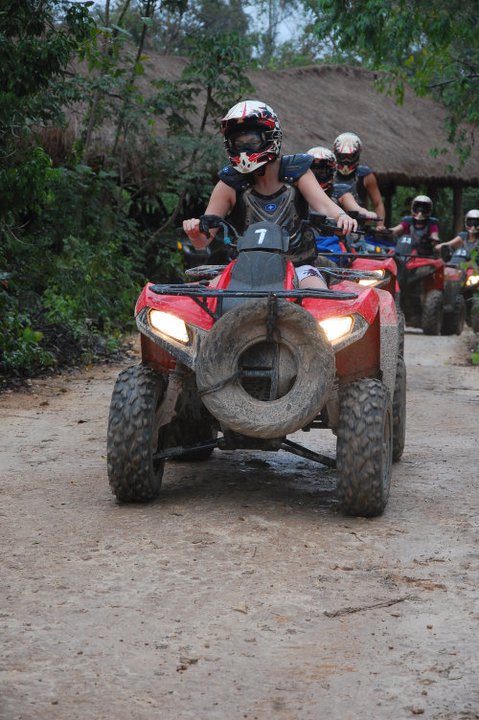 There were huge puddles of dirt and water everywhere, and there was no avoiding them.  If you go across them at full speed, the muddy water would splash as high as your head.  We were completely drenched and dirty a few minutes into it.  But after a short while, you cease to care, and the dirtiness became liberating.  The trip took about half an hour.

Covered from head to toe in mud, we parked our ATVs and were lead to our next destination, a natural cold spring in the middle of the jungle.  This was some well strategic planning on their part, because this last activity also served as a way to clean  ourselves off.  And even though the rain was still coming down in a light drizzle, we took off our shirts, put on some life jackets and headed to the edge of the spring.

They gave us three options for diving into the water.  1) Just jump off from the edges of the cliff “freestyle-like”  2) Use the hanging handholds and zip-line into the middle of the spring and let go, or 3) climb down the wooden ladders cautiously and be made fun of for being a wuss.  Everyone opted for option 2. 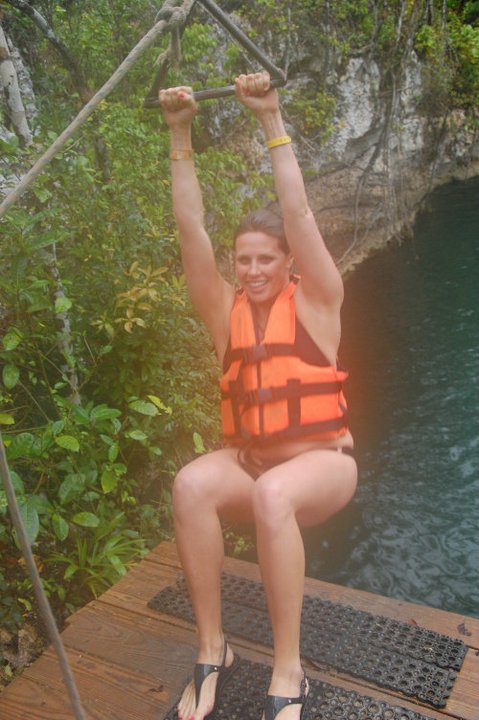 The water was refreshingly cool, and the dives were exhilarating.  Even though it wasn’t that warm, our exertions quickly overcame the chilliness.  We took turn launching ourselves off the platform, some even tried doing fancy tricks like going into the water face-first. 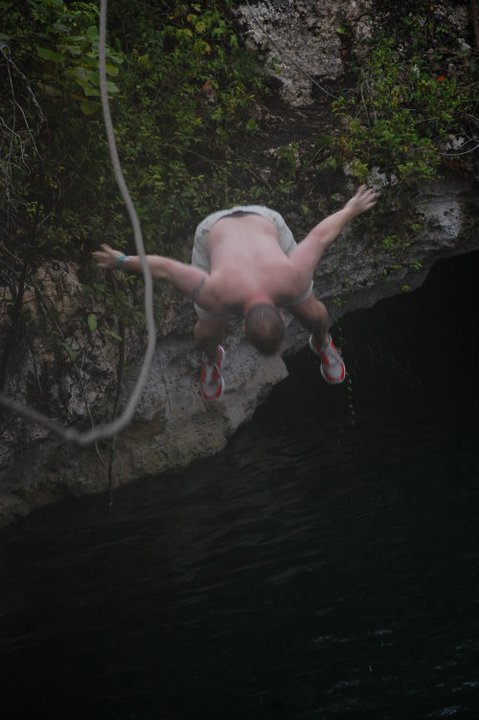 We spent maybe another 30 minutes at the spring before we had to leave, but not before the guides pulled a prank on the group.  As we were exiting the trail, it looked like one of the guys was poking frantically at something in the grass with a stick, screaming for help.  When we were close, another guy that was hiding behind the foliage jumped out screaming and wiggling a dark tree branch as though a snake had launched itself into the air.  I think Pat screamed the loudest, we all had a hearty laugh at his expense.

The mexican limousine shuttled us back to the main area, where we dried ourselves off and browsed the giftshop.  Shortly after, they sat us all down and served us our “lunch” (at 4pm in the afternoon), consisting of grilled chicken, rice, and re-fried beans.  It was surprisingly delicious (but it might be because we were starving)!

They also showed the photos and videos of us doing the activities throughout the day, and it would cost another $100 to take them home with us.

We went back to the resort exhausted, but knew the day wasn’t quite over.  It was our last night in Mexico, and by gosh we’ll make the best of it.  Everyone adjourned to their rooms for a quick shower and got dressed for the fancy Italian restaurant they had in the resort. 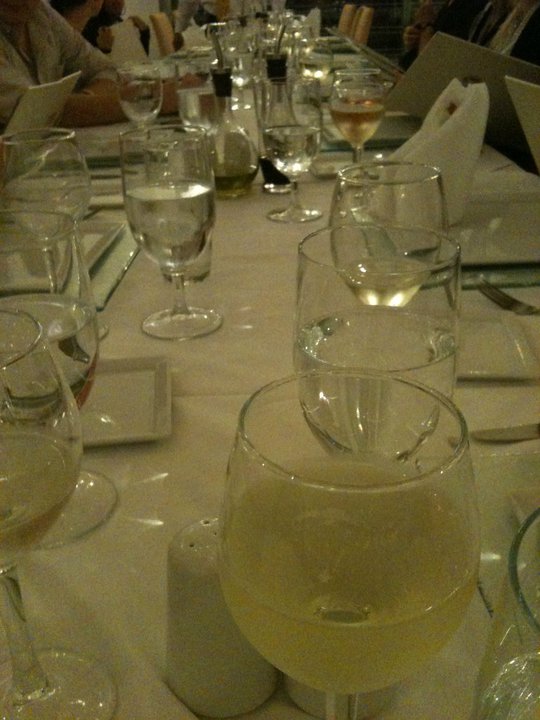 The food was, once again, delicious.  I don’t think we had one bad meal the whole time we were in Mexico.  They served penne pasta and meat sauce spaghetti as appetizer for gosh sakes!

Leticia joined us and organized the trip downtown.  She wanted to take us bar hopping, but with the state of the group after the long day, I think bar “limping” would be more accurate.  We ended up going to an open air, laser filled club called “Danzantes”. “It’s just like dancers but in spanish!” said Leticia on her Facebook post.   We had table service full of Redbull and Vodkas and flaming shots of liquid death! 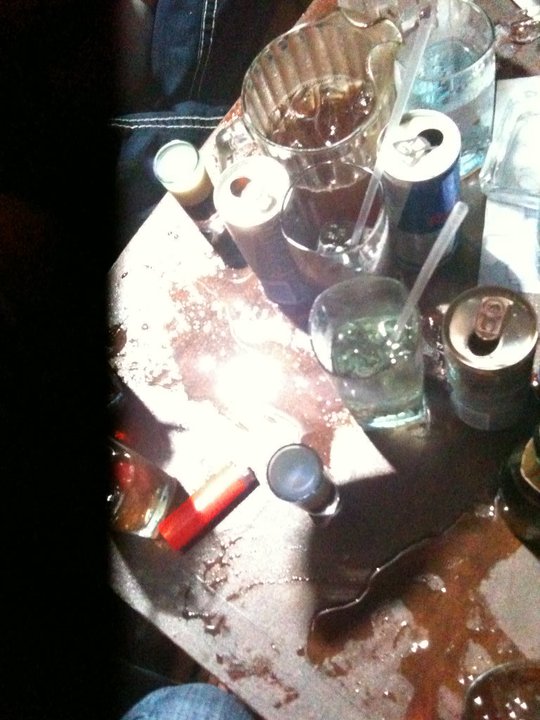 So they blasted the music and we broke it down on the dance floor until our legs fell off while attractive women get hit on by Reed and Brian downed the Greygoose.  Vinny made some new friends while I danced with the old and the night wore away like the shifting sand.

We couldn’t do too much after that.  Tired and intoxicated from the day’s adventurers, we went straight to bed.

It was gorgeous and sunny the day we had to leave.  Here is the journal entry I wrote while in flight back to Texas.  I think it’ll wrap up the trip nicely.

On the way back from Playa del Carmen.  The blue sky and cool caribbean breeze made it so much harder to leave.   Amidst white sand and emerald water and among the company of good friends, the weekend seemed to have rushed pass in a blur.

My whole body aches from yesterday’s action packed excursions.  We zip-lined and rode ATVs and dove into cool natural springs.  The dancing at the loud and laser filled open air bar didn’t help.  And boy did we danced!  Sometimes you just got to give into the music.

Wish we could’ve stayed longer.  The trip had been almost surreal, like a commercial break between a reality TV show.

The plane is about to land in Houston.  After that, home sweet Austin home.”

So the short and sweet weekend trip was over, and we’re back to our daily lives.  Happy 30th birthday Ange!  And thanks everyone for sending my brain to paradise and back.  Let’s do it again some day.