For her 30th birthday, Pat Matthews flew his little sis, Angela, and the entire Matthews clan to Mexico to celebrate.  Only a handful of friends managed to book the last minute flights to join them.  The 30th birthday seems to be a big deal for the Matthews, as they’ve thrown crazy parties for both Pat and Brian when they’d turned 30.  It is as though it was some kind of rite of passage, like they’d leave the immaturity of their younger years behind and enter the responsible landscape that is adulthood.  But before doing so, they have to go out with a bang!

We’ve decided to all stay at the Playacar Palace, an all inclusive resort in Playa del Carmen’s hotel zone, but only a few blocks away from downtown.  Vinny and I paid $1,174.00 for the superior deluxe room with 2 full-size beds and an ocean view for 2 nights,  making it roughly $300 per person per night!  The price included all our meals, unlimited drinks, room service, and $100 credit toward the spa.  But, as you will see, we didn’t take full advantage of the “all inclusive” part of the deal. 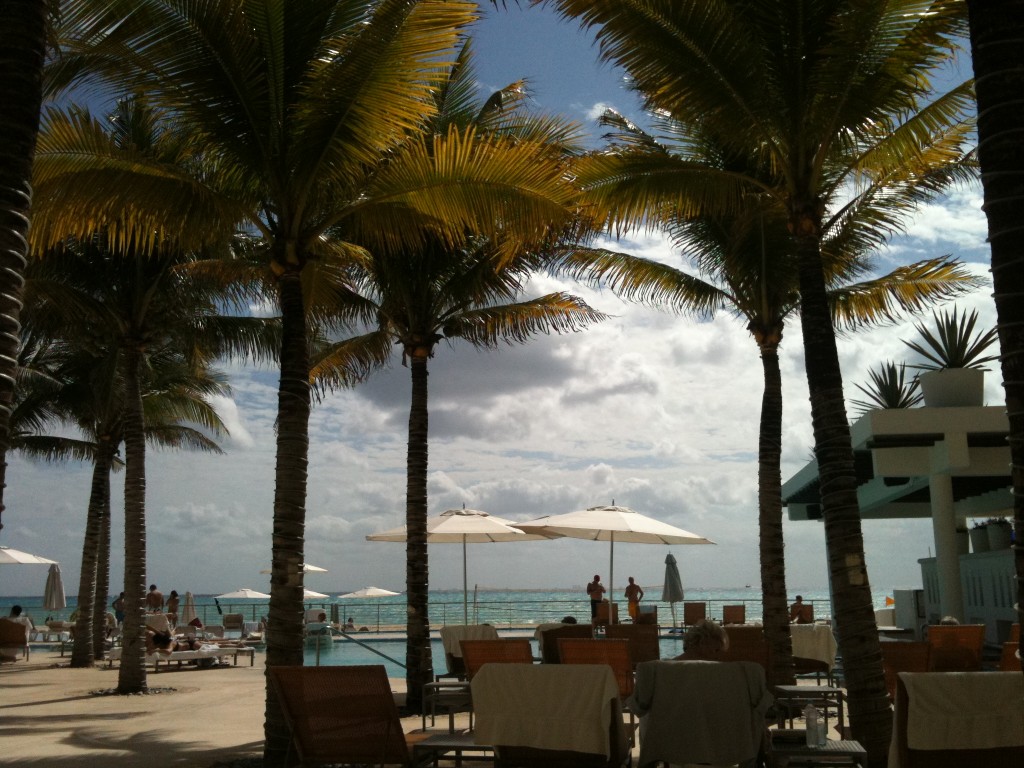 After checking in, we went to the resort’s main bar (they have 3) and met up with Berger and Reed, two of Pat’s long time friends from his younger days.  With them was Anson, Berger’s fun and loving wife.  Despite being married with kids, Berger can still keep up with us single boys when the occasion arises.  While Reed seems to be in a state of perpetual intoxication.  Pat showed up a few minutes later, sporting his metro-sexual shirt and his bemused signature smirk as he gave us hugs and welcomed us to Mexico.  Vinny and I promptly started downing mojitos and tequila shots. 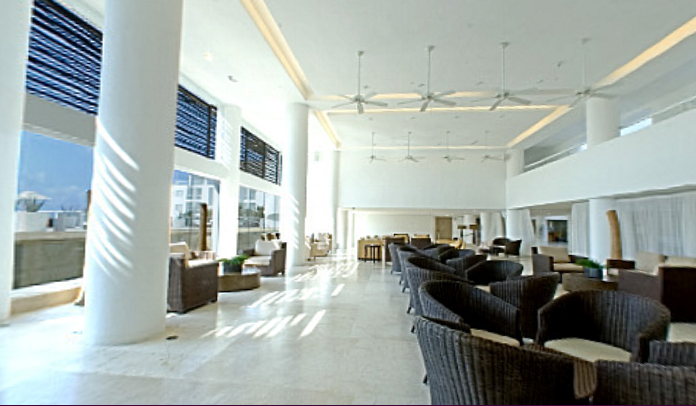 Julianne, Pat’s girlfriend, arrived not long after, accompanied by Pat’s mom, Sylvia and baby Mason.  That kid has been to more places than some of the people I know.  Pat’s dad, Mickey, followed after, wearing a full suit and shiny polished shoes.  Someone had told him we were going to a fancy restaurant, which is true, but not that kind of fancy.

It took a bit of time rounding everyone up, but eventually the rest of the crew joined us.  Angela and her two friends, Katie and Jeanie, were all staying in the same room on the 4th floor.   Brian and Lauren were on the 5th.  All in all, counting baby Mason, there were fifteen of us that showed up for this south of the border excursion.

We headed out of the resort and boarded a shuttle that Pat had arranged earlier to 5th avenue, a street where a majority of the clubs and restaurants were located.  Pat had made reservations at a place called “The Glass Bar”, which turned out to be more of a fancy restaurant than a bar. 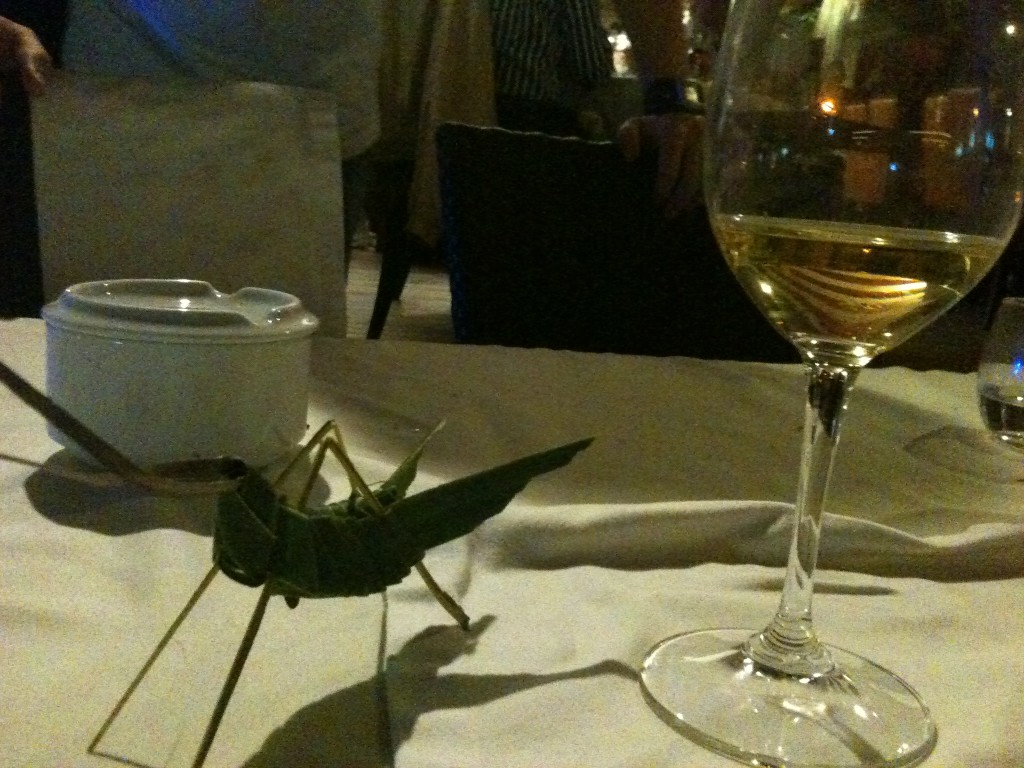 Angela, Katie, and Jeanie had been friends for ages, and this was a great occasion for them to reunite.  Everyone had been here a day ahead of us, and were telling us the state “Storm” was in the night before.  “Storm” is a nickname that everyone lovingly called Angela, from an era long passed.  When I first met her, I’d asked “Why do they call her ‘Storm’”?  The answer, “Well, if you hang out with her when she’s drunk, it’d feel like a storm had came through.”  Fortunately, the Storm doesn’t rage too often anymore.

The food was amazing, we had everything from grilled octopus to raw kobe beef and battered calamari; the best calamari I had ever had.  But those were only the appetizers, we waited for Leticia to show up before ordering the entrées.

Leticia is the girlfriend of a good friend of ours, Ryan Carter, who had recently made Playa del Carmen his home.  Unfortunately, he was out of town this particular weekend.  But Leticia more than made up for it.  She was a talkative, fun, and friendly chica who wanted everyone to have a good time.  Leticia played hostess and helped us out the rest of the time we were there.

Sylvia took baby Mason home a little bit into the night (after buying a bunch of shirts as souvenirs and handing them out like a female Santa Claus).  After the delicious dinner and the yummy birthday cakes, Leticia rallied the troops to a place down the street called “Coco Bongo”.  Take a Las Vegas show like Cirque Du Soleil, mashed it together with a huge bar slash club, then fill it with pop star impersonators and dancers and trapeze artists and you get something resembling the Coco-Bongo.  Leticia lead us through the VIP line to our table near the stage.  Around us the music blared and the crowd roared and the dancers danced and balloons and confetti dropped through the air. 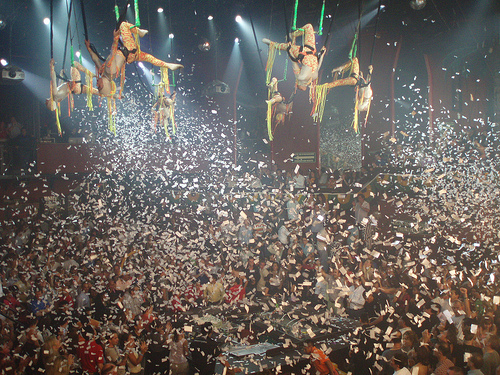 At one point they started letting random girls danced on the bar at the center of the club, and Lauren and Katie wanted to join them.  But as we were heading there, they caught the eyes of a bar staff, and were lead backstage.  The bartenders assured me that it’ll be okay.  Moments later, Lauren and Katie appeared at the top of the main stage as spotlights focused on them and they proceeded to shake their booties like the world was on fire.  It was the craziest experience at a bar ever!

The rest of the night became hazy.  We left Coco Bongo a while later and shuttled it back to the resort, where a few of us donned our bathing suits and went down to the beach for a late night splash.  The water was a bit chilly, and we moved to the pool.   There were a couple of resort staff standing around keeping an eye on us, and when I asked if we can jump in, one of them nodded.  However, only after 15 minutes or so, their manager came out and kindly informed us that the pool was closed and we should go to bed.  I think the drunken laughter and excessive clamor was a bit too much noise for the resort at 3 in the morning.

So we went to bed, dreaming of flying men and burlesque dancers.