Word of Warning Regarding Timeshare 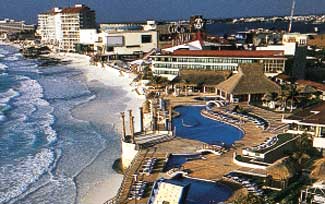 This was our first time to Cancun, so we didn’t know where to go or what to do, and I’ve forgotten to print out the vouchers and instructions telling us where to meet our ride to the hotel.  So Vinny and I decided to approach one of the official looking men under the “hotels and tours” sections near the airport exit.

The man that helped us, let’s call him Jorge, was very friendly and told us where to go to find our shuttle.  But before letting us go, Jorge asked if it was our first time to Cancun and if we plan to do any tours or excursions outside our resort.  We said we did, and he proceeded to offer us all kinds of discount that were up to 50% off the normal ticket prices.  He even offered us a rental car for free!  We were excited, are all Cancun’ers this friendly?  He claimed to work for the government too, so we thought maybe this is part of a Mexican government program to help tourists enjoy their stay.

In exchange, we were to meet him at the resort he worked for, the Krystal, a newly developed five star hotel near downtown, for a tour of the place.  A red flag went off in my mind right away screaming “timeshare!”, so I said “sorry, we’re not interested anymore.”  Of course Jorge was not appeased, he said it’ll only take 90 minutes and there are no obligations.  I looked at Vinny and he had this “let’s do it” look on his face.  He was thinking “we can walk away anytime, let’s get the discounts!”

Vinny ended up paying around $70 for the discounted tickets we would receive, and were to meet him at the hotel at 9 am the next day.  Then we left the airport and met up with our transportation’s representative.  When he told us we have to get our voucher signed in the morning, we replied that we had an appointment at the Krystal.

He looked at us with this incredulous look on his face and said, “You didn’t signup with one of those men in there did you?” pointing at the airport entrance.

We said we did, and he shook his head, “no no no, you know what that is right?  They are going to sell you timeshare, you don’t want to do that.”  We told him it would only take 90 minutes, and he laughed, “that’s what they tell you.  But it’ll take at least 5 to 6 hours!  It’ll ruin your whole day.  The guy talking will be in a nice suit and he will offer you drinks and he is a very smooth talker, and it’ll be very hard to say no.”

And he said if we just walk away, we will not get any of the stuff he promised us.  “Go get your money back, if he refuse tell him you will get the policia.”  I said it’s only $70, let’s just walk away from the thing and chalk it up as a lesson learned.  “You know $70 will feed a family in Mexico for a week right!?” said our representative, “march back in there and get your money.”

So Vinny marched back in there and got his money back.   He ended up tipping the timeshare dude 5 dollars, and since we were thankful we tipped our representative $10.  Vinny had already spent 15 bucks to get out of a timeshare meeting and we had just arrived in Cancun!  But I’m so glad we did because it would’ve ruined our whole trip.

On our way back to the airport a few days later, we met a couple from Houston who had a similar story to tell.  Unfortunately, they didn’t have a nice representative to rescue them from the timeshare trap.  They were approached by someone in their resort, the Temptation, to buy a 24 year package for timeshare to that hotel.  She said that the meeting took the whole day, time she could’ve spent at the beach.  And she did end up writing a $1900 check as a down payment to the package, (they were drunk by the end of it).  Her husband did went back the next day to cancel the whole thing and to get their money back, but it would take 10 business days for the money to be refunded.  I hope they got their money back.

So, if you ever come to visit Cancun and didn’t know about these traps, remember this.  When you’re exiting the airport you’ll see a bunch of guys dressed all nice in blue shirts and black pants, looking like they can help you with whatever you need, just walk on right pass them and out the door.  They are not there to help you.

5 responses to “Word of Warning Regarding Timeshare”