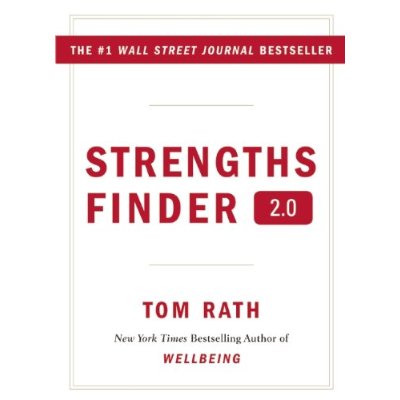 The company I work for have stacks and stacks of the Gallup Press’s Strengths Finder books.  Everyone that work for us have to take the test to find their top 5 strengths.  New recruits will have a print out of their strengths by the end of the orientation process, to be taken to their cubicles to proudly display it on their desks.

When we got acquired by Rackspace in 2007, this was one of the things we had to do as part of the HR transfer process.  I played along (I’m not a big consumer of self-help books).  There were reasons for me to believe that this test was a bit bogus, which I will get into in a bit.  But overtime, the results and philosophy of this process grew on me, and I’ve come to change my mind about it.  So recently, as Borders was closing its stores all over the country, I went into one and grabbed a couple of extra copies.  I gave one to my friend and kept one for myself, so that I can retake the test completely independent of the first test and see if the results match up.

Here’s how it works.  Each book contains a code that allows the owner to go to their website, register, and create an account.  It can only be used once, so you’d have to buy multiple copies of the same darn book if you want all of your employees to take it.  Once registered, the user can take the strengths finder test by answering a series of eHarmony-like questions.

The format imitates some personality tests I’ve seen in the past, where they offer two different statements that best describes you, and you are to pick which statement you’d lean more toward.  Here are some sample questions:

As you can see, some of these descriptions are pretty obvious in terms of what type of person would pick them.  But others are a bit more vague.  I mean, I enjoy both giving recognition and receiving them!  Some days I enjoy relaxing, other days I want to go clean things!  You can’t put labels on people this way because our moods change from day to day. Furthermore, the answers I gave became almost arbitrary.  When I came up against a vague question, I would randomly just pick a radio button, without analyzing it and making sure that it even matches my personality, because any answers could be correct depending on the day of the week and what was happening at the time.  So I became skeptical on how accurate the result would be going through these tests.

The first time around, these were my top 5 strengths:

If you want to get in depth with what each of those strengths mean, you can read the descriptions of a few of them on my About page.  But apparently, they were able to categorize the whole spectrum of human skills and capabilities into 34 different labels.  Another bogus flag went up for me.  It sounds almost zodiac-like!  Indeed, if you read some of the descriptions of these strengths, they read like a paragraph out of a horoscope.  For example, here is an excerpt from the Intellection strength:

This need for mental activity may be focused; for example, you may be trying to solve a problem or develop an idea or understand another person’s feelings.  The exact focus will depend on your other strengths.  On the other hand, this mental activity may very well lack focus.  The theme of Intellection does not dictate what you are thinking about; it simply describes that you like to think.

I mean, doesn’t that read like a horoscope entry describing people of the Pisces sign or something?  Also, many people will be able to identify with the above statement, going “Yea!  That’s me!”.  Furthermore,  I noticed they sprinkled their descriptions with these tidbids of general facts that makes you inadvertently agree with them.  Sentences like “The earlier time was a simpler time.  It was a time of blueprints.”  And “The world is exciting precisely because of its infinite variety and complexity.”  Yes!  Those statements are true!  So the whole paragraph seems to be more truthful and official.  Sneaky sneaky! 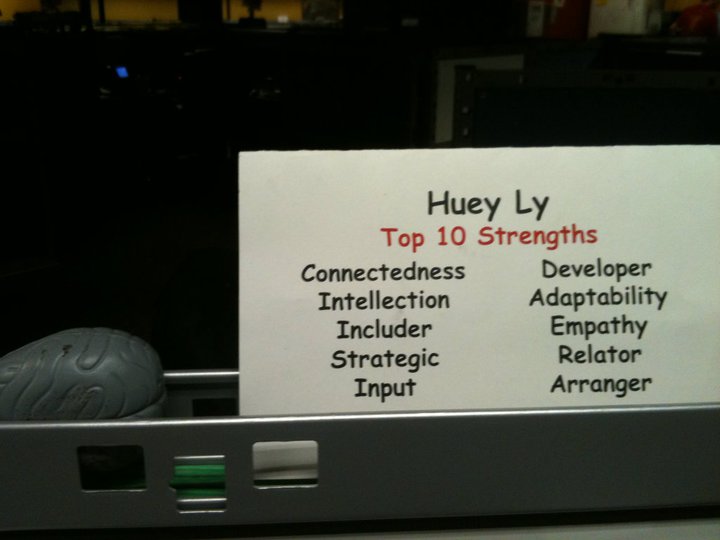 But despite my skepticism, I did eventually buy into the whole thing.  Yes, take the test with a grain of sand, but it can be useful in its own right.  Firstly, it forces the test taker to analyze his or her own personality, making that person spend more time thinking about what they are good at.  We often go about our daily lives without spending so much as a second for introspection.  But introspection is the ultimate catalyst for growth, and we should really do it more often.

Secondly, sometimes the person grows into the role.  The test says I’m an “Arranger”, so I’m just gonna go start arranging things!  Yea, more meetings! This placebo behavior did have its effect on me.  One of my strengths was “Includer“.  Most people I work with would go “Oh yea … you are definitely an includer” whenever they see my strengths.  Which really just means I’m friendly and sensitive to people’s feelings at certain times.  But it did make me become even more empathetic and making sure no one feels left out more so than before.

And lastly, they make great icebreakers and water cooler discussions, and provide a legitimate way to throw labels on each other and not waste too much time trying to actually figure out what a person is really like.  Yea, sarcasm.

So, all that said, let me reveal what I learned after taking the test the second time around.  I wanted to see how accurate (or precise?) this test was based on how closely the results of the two tests reflect each other.  To my surprise, they were pretty similar.  Here is the result of my second test:

As you can see, my top two strengths are still there, but swapped places.  Of the 5 top strengths, 3 of them still remain after the 2nd test.  The two that got swapped out were Includer and Strategic, which honestly I feel that I’ve care less about those traits recently.  I bet they’re still in my top 10 though.  And you can also argue that people strengths do change over time, as the environment or the experiences they went through slowly shape them.  An ideal test would be to force a subject to take the test once, wipe his memory of taking it, then make him take the test immediately after.  Regardless, the test doesn’t seem as arbitrary to me anymore after seeing these results.

So, for $24.95, this book maybe worth it for you if you’re into this kind of thing.   The analytical self-help setup adds a level of legitimacy to the process.  And it does help you think about yourself in clearer, more productive terms.  I know my company believes in its value, and on certain days, certain parts of my brain do too.

22 responses to “I Took the Strength Finder Test Twice”